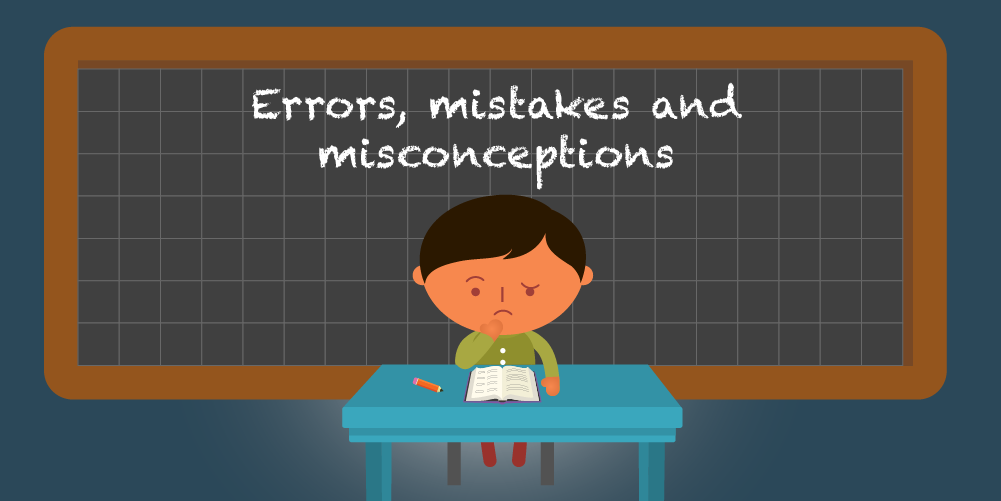 Common maths mistakes and misconceptions (and how to help)

Maths can be a tricky business and kids often end up getting in a muddle.

And that's OK - it's a perfectly natural part of learning. No one is born good at maths!

The following examples demonstrate how slips and misconceptions can arise, and how you can use them as opportunities to improve your child's understanding.

Look through the illustrations and talk about them with your child, remembering to use words that empower your child to build a growth mindset, for example "I know you can," "You can do it!" and "Let's see if we can work it out together."

Maisy says she has written the number sixteen.

Is Maisy right? What do you think?

In this example Maisy has reversed the digits. This isn’t necessarily because she has dyslexia or dyscalculia either. She has just written the number as she has heard it: sixteen.

Try: Write out numbers for your child to say, and say numbers for them to write out. This will help them become familiar with how the different numbers are written. 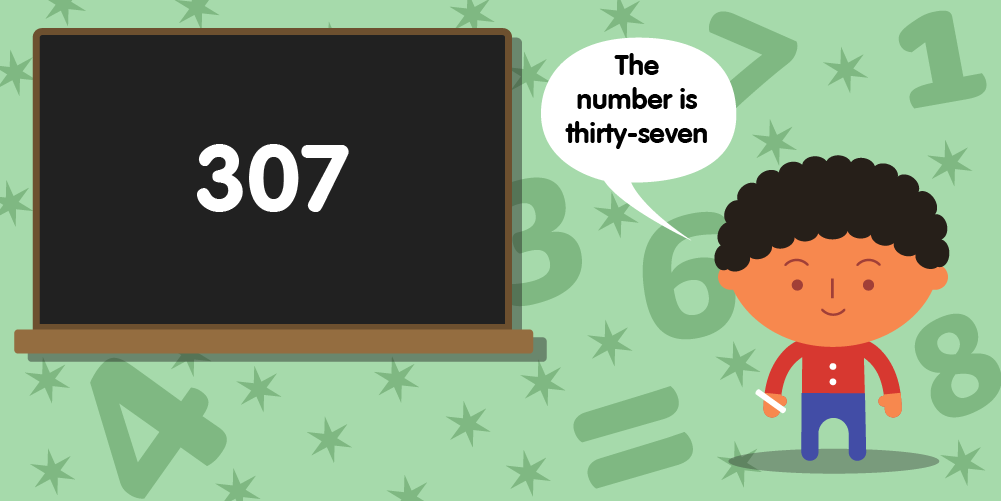 Do you agree? What do you think?

In this example, Kieran has read the digits as 30 and 7. He hasn’t seen the place value of the 3 as three hundreds, the 7 as seven ones and the zero as the number of tens.

If we have no ones, tens, hundreds etc then we must write 0 in the appropriate column. Remember that the position of a digit determines its value.

Try: Write out numbers including a zero and place them in their correct columns marked hundreds, tens and units. Say the numbers and ask children to try to write them down themselves, e.g. one hundred and one, five hundred, one thousand and six etc. 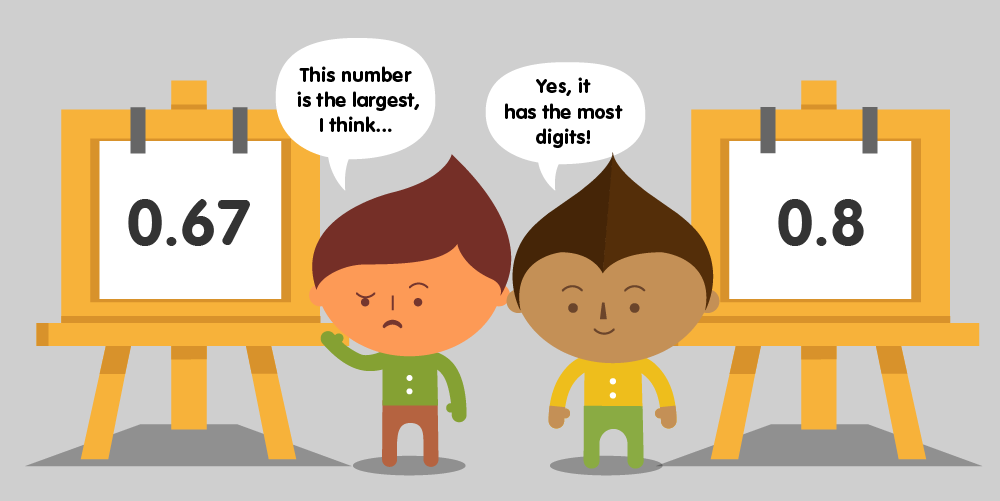 Talk with your child about why Nishen’s group have got mixed up because they have read the digits after the decimal point as whole numbers. They need to understand that for each place to the right of the decimal point, the numbers are successively smaller by powers of ten.

Hetty has two coins in her purse. 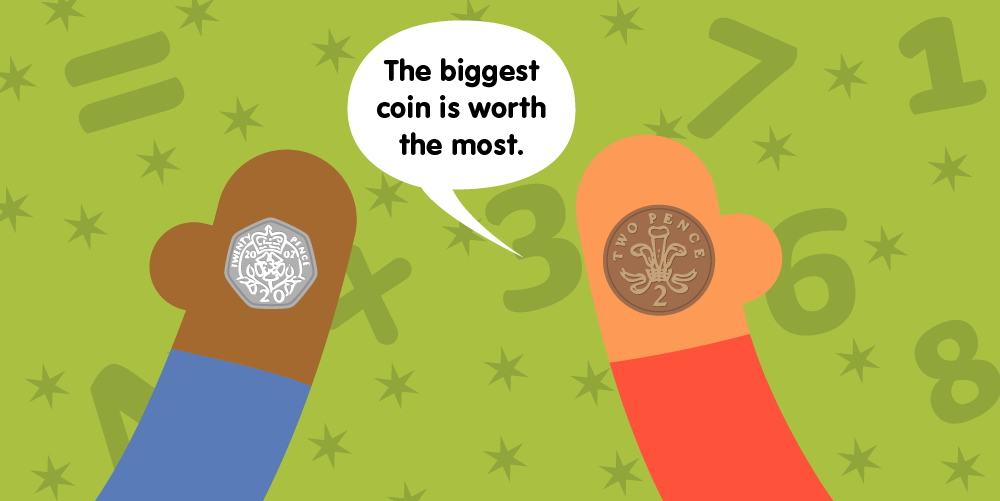 Ged says the biggest coin is worth the most.
Is he right?

It is a common misconception for younger children to see a bigger object as having more value - the bigger piece of cake is better than the smaller one! So we just need to teach kids that the value of a coin is not directly proportional to its size.

Try: compare the sizes of a variety of different coins and focus on the numerical value of each. 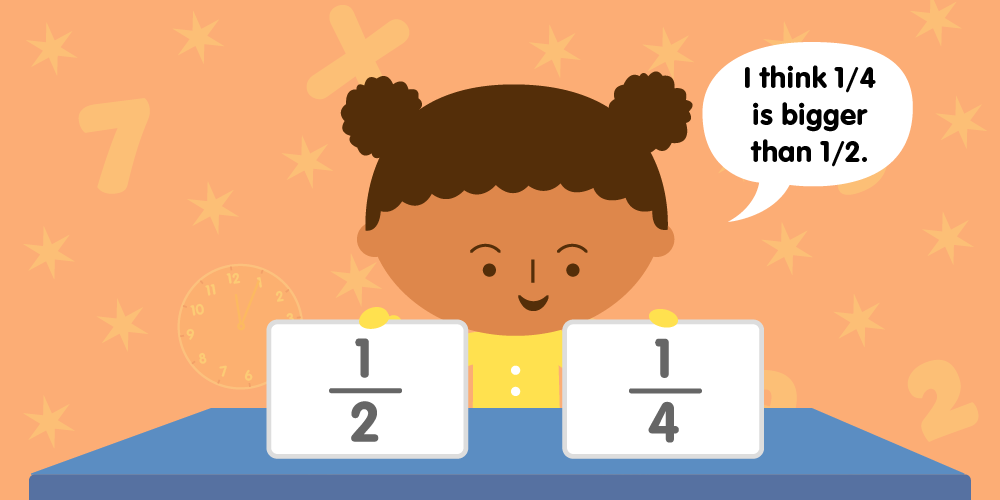 Often, children do not see a fraction as a single quantity but rather see it as a pair of whole numbers, and they apply whole-number thinking by comparing the size of the numbers in the denominators, the numerators, or both.

Liam says that he has divided the shape below into quarters. Is he right? 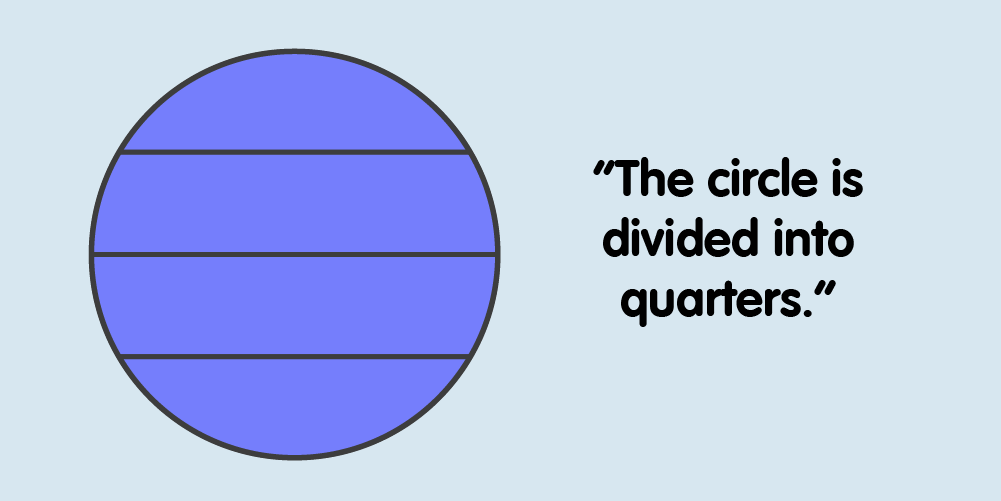 In this example, Liam has not divided the square into equal parts. This might be because he doesn’t understand that it’s not just enough to have four parts but that they also need to be the same size.

Gavin and Kim are looking at some angles their teacher has drawn. 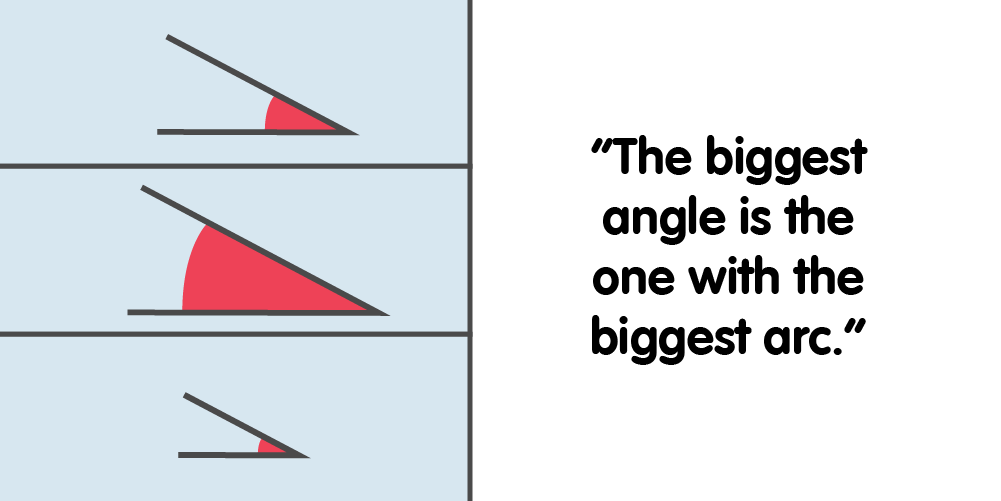 Kim says, “The angles are all the same size.”

What do you think?

Gavin is a bit confused about what an angle is and thinks that it has something to do with the area in between the two lines. Remember that angle is a measure of turn not the length of the arc.

Some children also confuse the length of the lines with the size of an angle. This happens if they do not understand what the angle is measuring, which is the rotation of the lines.

Try: Lay out a 30cm ruler to mark a starting point, then ask your child to face the direction of the ruler and turn around on the spot. (Encourage them to make a turn of less than 180 degrees to best demonstrate this point). When they've turned they can use another ruler to mark where they finished facing. Then do the same exercise from the same point using a 100cm piece of wool or string as your start and end point to show that it is the rotation that is what is being measured, not the length of the lines illustrating the angle.

Parvin says that multiplying by 10 is easy because “All you have to do is add a zero on the end.” 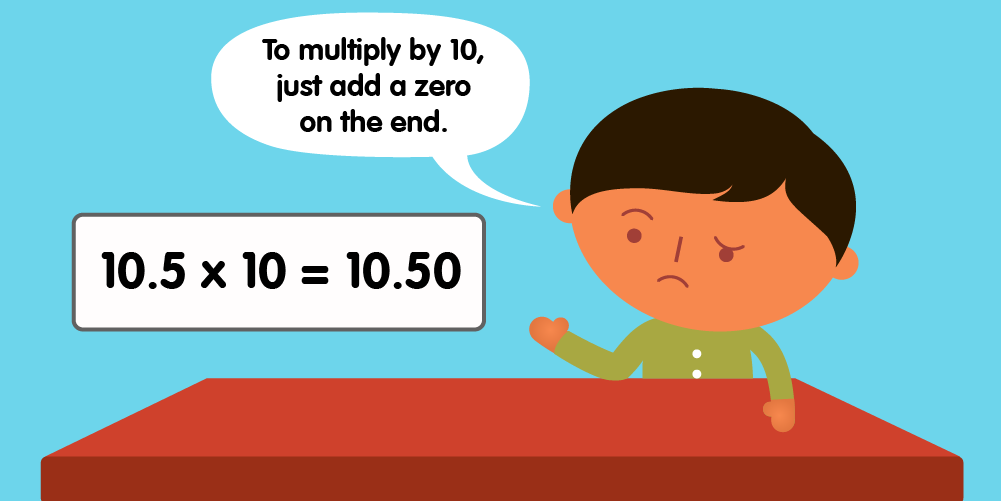 When multiplying by 10 it is much better to think about it as moving all the digits one place to the left so 10.5 becomes 105. The decimal point is like a concrete post – it doesn’t move! Digits move past the decimal point.

Try: asking your child to multiply whole and decimal numbers to practice, letting them use a calculator to check their answers.

Imogen says, “When you multiply two numbers together they always get bigger.” 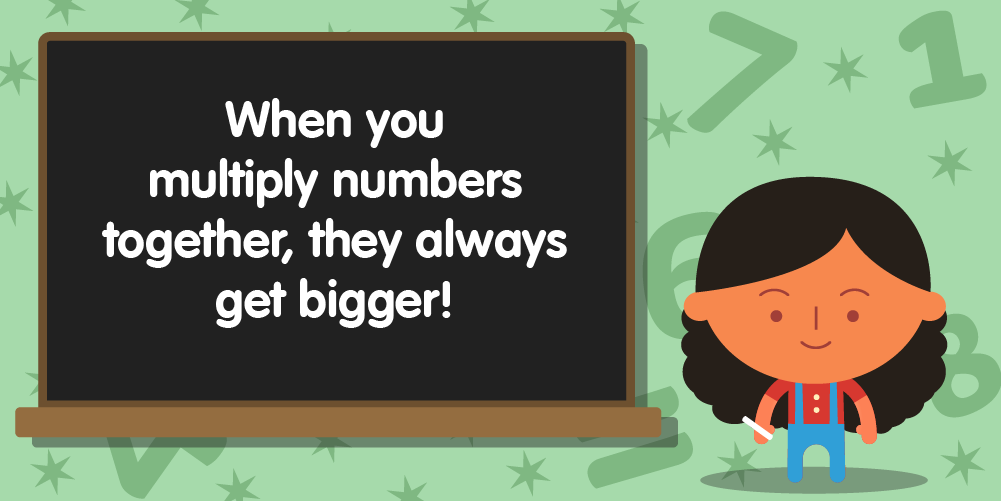 It is a very common misconception that multiplication makes things bigger. The word ‘multiple’ itself carries a sense of many or a great number. Children first encounter multiplication in the context of whole numbers, a situation where you mostly end up with a larger number.

But sometimes multiplying numbers together gives a smaller answer, e.g. 6 x ½ = 3. It depends on which numbers are multiplied together. Multiplying by 1 gives the same number, e.g. 16 x 1. Multiplying any number by zero gives zero, e.g. 0 x 200 = 0. 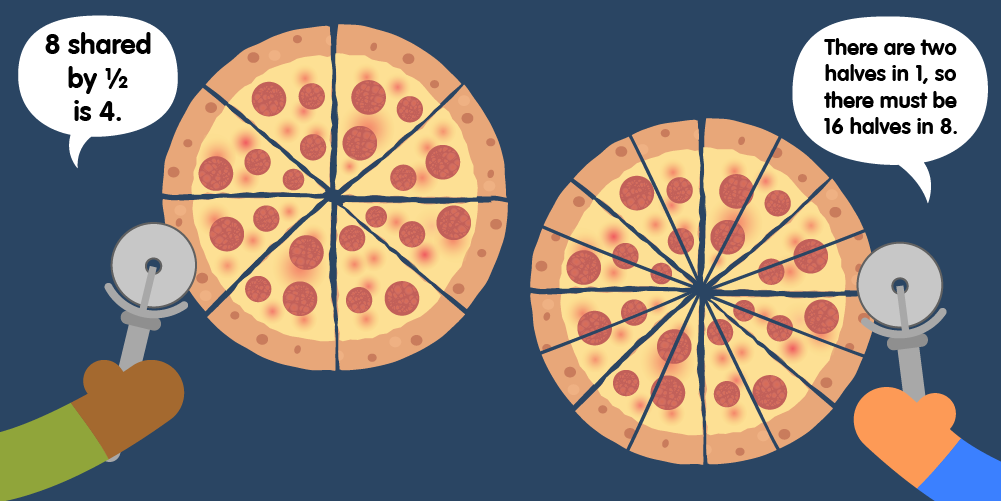 Ask your child, do you agree? What are your thoughts?

It is a very common misconception that division in maths makes the number smaller. This idea is understandable and a part of a healthy number sense when you’re talking about whole numbers. Division is commonly thought of as sharing but in maths there are other meanings as well.

For many children it seems inconceivable that 8 divided by ½  should give 16 as 16 is bigger than 8. But dividing by a fraction will make the number bigger. The example above could be illustrated by saying: “Cut a pizza into eight equal pieces. Now divide each piece in half. How many pieces of pizza do you have?”

Try: practice similar examples dividing by ½ and use a fraction wall to help. Try dividing a number by 1 – what happens? What about dividing by zero?

Remember that maths is all about talking and discussing ideas together. Children make sense of their experience, shared or otherwise, on the basis of what they already know. As parents we have a huge part to play in helping them think things through and see the maths from more than one perspective.

I'm John Dabell, a teacher, writer and former school inspector. I have written books about numeracy and love helping children see the creativity in maths!

About Komodo – Komodo is a fun and effective way to boost primary maths skills. Designed for 5 to 11-year-olds to use in the home, Komodo uses a little and often approach to learning maths (15 minutes, three to five times per week) that fits into the busy routine. Komodo users develop fluency and confidence in maths – without keeping them at the screen for long.