With the twenty four best football teams in Europe battling it out to be number one - put your maths skills to the test to see if you really understand how the competition works.

This is a maths quiz for kids and big kids aged 5 to 11, but whatever your age simply start at the beginning and keep going!

Now you can skip to the Puzzle  or take your time and read some background facts about how the competition works:

Here are the scores from all the games in Wales and England's group.

Your task is to complete the league table below. To do this ask yourself: 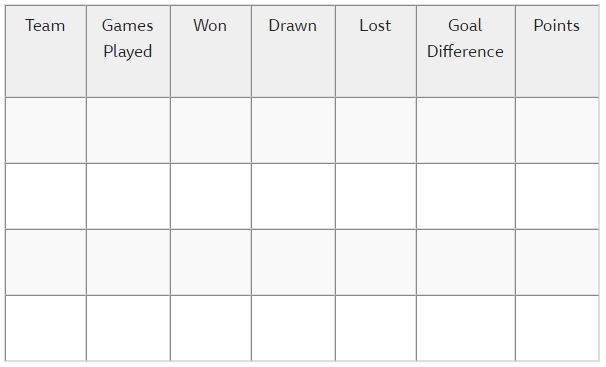 The challenge question - a hard one!

I hope you enjoyed this puzzle!

I'm Colin Beveridge, friend of Komodo and author of "Basic Maths for Dummies" and "Cracking Mathematics". I worked as a researcher on NASA’s Living With A Star program, using data from satellites and telescopes to study the structure of the Sun’s magnetic field, but left the USA in 2008 to focus on writing and tutoring. I now live in Dorset where I run long distance and look after my young family.

Find out more about Komodo and how it helps thousands of children each year do better at maths - and you can try Komodo for free. 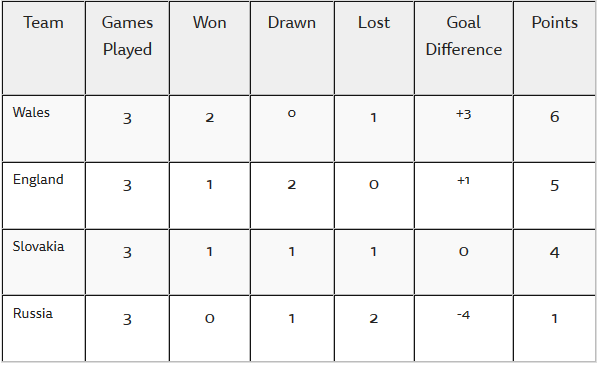 If you used the real scores you'll find the table here.

How could a team qualify for the second round with only one point?

Let's call our team C. To get one point, C must have lost two games (against teams A and B) and drawn one (against D). A and B have at least three points, so must finish higher than C (with one point) -- so it's not possible for C to be in the top two. Could they qualify in third? Team D have at least one point (from drawing with C), but they could finish below C if they also lost to A and B, and ended up with a worse goal difference than C.

In addition, at least two teams in other groups would have to finish third with one point and a worse goal difference. It's not likely, but it's possible!