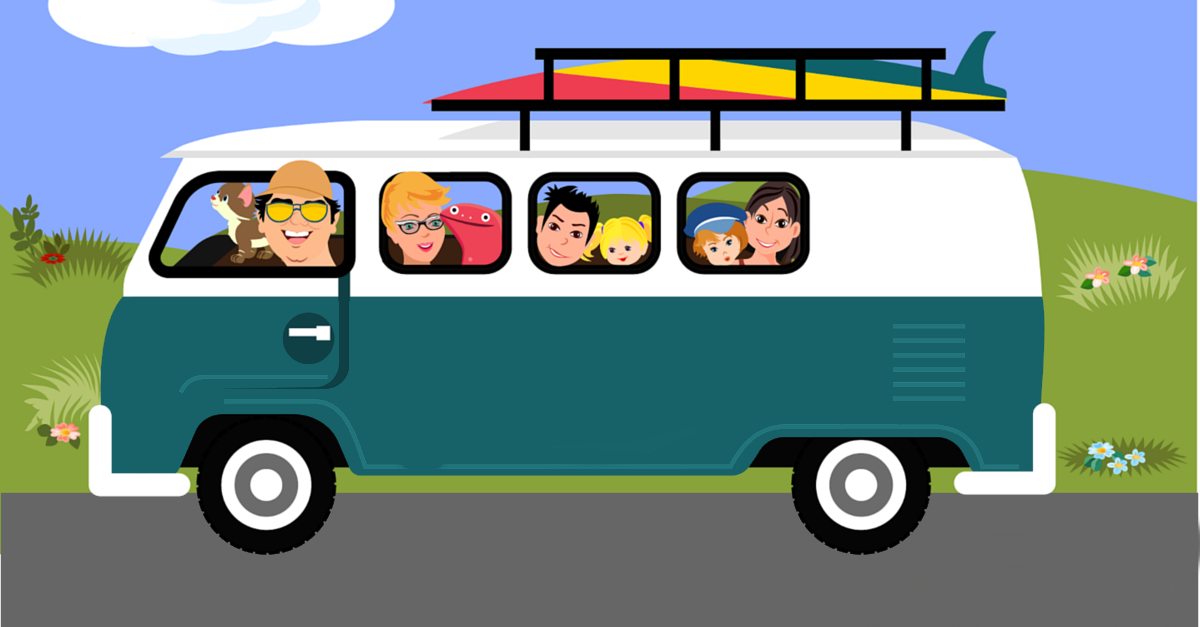 Are we nearly there yet? Maths games for family trips

Just twenty minutes into a 4 hour car trip and a small voice pipes up from the back seat: “Are we nearly there yet? I’m booooored.”

Although it is oh so tempting, don't immediately reach for the devices to entertain the kids, give these maths games a go instead.

Encourage everyone to get involved (yes, even grown-ups) for some healthy competition. It may seem rather retro, but we guarantee you more fun than you imagine!

You can hardly look out of a moving car window without seeing a number — whether it’s on a road sign, an advertisement hoarding or, most reliably, a passing car’s number plate. The canny driver with restless passengers can use these as a sort of random number generator for several possible games.

“Odd or even” is good both for practicing recognition of numbers and for counting. The game is to predict whether the passengers will spot more even numbers or odd numbers on number plates before a time of your choosing — and then test that hypothesis!

One player counts the odd number plates; the other the even. As a car goes by, someone — either one of the players or a neutral — should call out the number on its plate; the player who just ‘scored’ then calls out their new total.

Odd or even can be played to a time limit or until someone reaches a given score, depending on what the players prefer!

It’s not very practical to play cards in the car (especially if you’re driving). However, you can play a variation of blackjack without having to worry about shuffling and dealing, while still getting the mathematical benefits! Each player’s goal is to get their total to 100 — or as close to it as they can.

Each player starts from zero, and take turns to ‘add a card’. When a vehicle passes, add up the digits on its number plate and adds the total to the running total: if they have 47 and a car with the number ‘194’ on its plate passes, they would add 1+9+4=14 to their score and say “61”. They can then choose to ‘stick’ and make that their final score, or twist and add the next number plate to their total. If they go over 100, though, bad luck! They score nothing.

* There’s nothing special about 100 — if you want to pick a higher or lower target, feel free!

If times tables is an area you're keen to work on,  use number plates for practice. When a car passes, call out the digits on the number plate; the players race to multiply.

If the number on a passing number plate is 352, the first person to work out 3 × 5 × 2 and say “30” gets a point; set a winning target depending on how long the journey is and how busy the roads are.

* For younger or more tired children, you can try adding the digits rather than multiplying.

Number plates aren’t the only maths tool at your disposal on your travels. If the kids can keep their eyes peeled, there are plenty of other ways to use the features they can see out of the window as a source of maths practice games. (Spotting games are also more useful for train journeys, where you tend not to see so many number plates.)

“Spot the shape” combines shape knowledge, observation and a little bit of creativity! The game is to be the first to spot a named shape: for example, if the shape is ‘circle’, someone might point out the wheel of a lorry; if it’s ‘triangle’, a road sign might fit the bill.

Only the most competitive families (like mine) keep score in this one.

* Be prepared to make rules about what’s allowed — can a triangle have rounded corners? Does a rectangle count as a square?

For slightly older children, travel cricket is a great way to keep them from whining for a while! Don’t worry, though, you’re not going to need to set up a wicket on the back seat and recover leg-byes from the hard shoulder!

* This one is easy to make longer or shorter as necessary — play several innings to make it longer, or reduce the number of wickets to make it shorter!

Games you can play in the dark

Observation games are great for whiling away the hours in the daytime — but what about at night, when it’s too dark to spot bikes on roofs? We’ve got some ideas for that, too!

Fizz Buzz is one of the classic travel games — so classic, it’s sometimes used as an interview question at programming firms! It’s a cross between a counting game and a times table game, and it has the merit of being collaborative rather than competitive. Here’s how it works:

You know the game Guess Who?, where you have a board full of flipped-up faces and you have to deduce which of them your opponent has chosen using yes/no questions? Again, that’s not really practical for the car. However, you can do something similar in your heads using numbers instead of faces!

The hider picks a number — let’s say between 1 and 50, but you can choose different limits. The guesser asks yes/no questions, such as: is it odd? does it have a 7 in it? is it a prime number? — and the hider answers truthfully. Once the guesser has successfully guessed, the roles switch and the game goes on as long as there’s interest in it.

Are we nearly there yet?

There are dozens of ways to ask questions about the journey itself to add some mathematical interest to the never-ending tedium of travel. Get the children to estimate things and see, later on, how close they were. How many miles are there still to go? How long will that take? What time will that be? How far is it until the milometer hits the next round number? How much petrol will it take to fill the car up? How much will that cost? You could go on for hours… and you probably will!

Spending long hours on the move with unhappy passengers is most people’s idea of hell — but with a little inventiveness and a sprinkling of maths, the journey can turn into something that seems to pass just a little more quickly, while building their maths skills.

I’m Ged, Co-founder of Komodo, ex-maths teacher and dad. If you have any questions please get in touch.

About Komodo – Komodo is a fun and effective way to boost primary maths skills. Designed for 5 to 11 year olds to use in the home, Komodo uses a little and often approach to learning maths (15 minutes, 3 to 5 times per week) that fits into the busy routine. Komodo users develop fluency and confidence in maths – without keeping them at the screen for long.