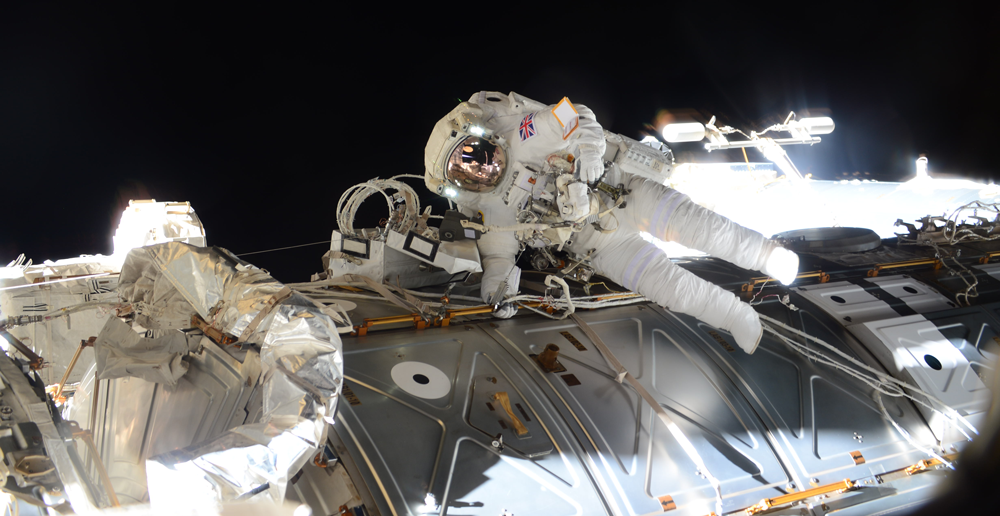 How fast? How far? How high? - A maths in space puzzle

Hi there - I'm Colin! I haven't actually been to space, but I have worked for NASA on some very interesting space projects. Here's a special maths in space puzzle I've made for Komodo.

On December 15th 2015, Major Tim Peake became the first British ESA astronaut, taking off from the Baikonur Cosmodrome in Kazakhstan on the Principia mission to the International Space Station, or ISS for short. The photo above shows Tim outside ISS on his first space walk. (Photo: ESA)

The ISS travels at a height of 400 kilometres - about 40 times higher than an aeroplane travels - and it takes about an hour and a half to go all the way around the Earth. At the moment, Tim Peake is literally faster than a speeding bullet!

We have many ways to measure how fast things go - if you're talking about a car, you probably use miles per hour (sometimes mph for short). Saying a car is going at 30mph means that if it drove at that speed for an hour, it would travel 30 miles. Britain and the USA are unusual, though - pretty much everywhere else in the world normally uses kilometres per hour (or km/h for short), so that's what we'll use in this puzzle! 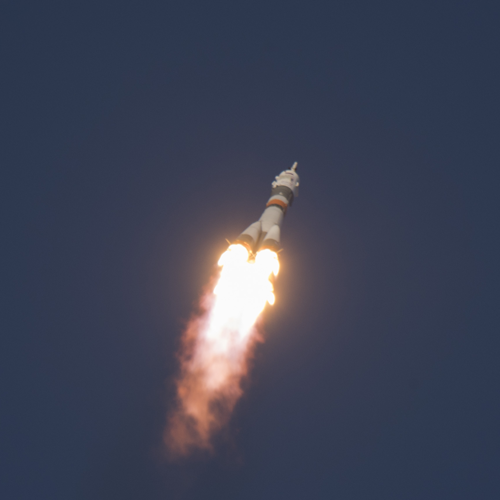 In this puzzle, we're going to be looking at how the speed of the rocket taking Major Peake to the ISS changes during take-off, the most exciting part of any space mission. Imagine being strapped into a small seat inside a rocket beside your crew-mates, listening to Mission Control counting down the seconds to launch: ten... nine... eight... seven... six... five... four... three... two... one... LIFT OFF!

Only, you probably don't hear them say "LIFT OFF!" because an incredibly loud rocket has just started up right behind you, and your stomach lurches as you hurtle into the air. If you've ever been on a roller-coaster, you'll know the feeling! (Only, on a roller coaster, you just feel it for a few moments - when you're going into space, you get the feeling for as long as the rockets are firing.)

And as long as the rockets are firing, your speed goes up by the same amount every second*.

Download and print the Lift off Graph paper(PDF) to draw a graph representing the rocket’s speed after launch - it will help you with the challenge questions below!

1) What shape have you drawn?

2) How fast is the rocket going after four seconds?

3) How fast is the rocket going after 12 seconds?

4) How many seconds does it take the rocket to reach the speed of sound, which is 1,000 kilometres per hour?

5) What is the speed of the rocket after one minute?

6) How long does it take the rocket to reach the speed of the International Space Station, which is travelling at 27,600 kilometres per hour?

Here are the Answers ( PDF) - but be sure to try the puzzle first!

Colin Beveridge worked as a researcher on NASA’s Living With A Star program, using data from satellites and telescopes to study the structure of the Sun’s magnetic field. Although he’s never been to space (at least, not yet!), his colleagues at Montana State University included an astronaut and several rocket scientists.

Colin left the USA in 2008 to focus on writing and tutoring. He is the author of Basic Maths For Dummies and several other books in the same series, as well as Cracking Mathematics, an unreliable history of maths. He lives in Dorset, and runs long distances when he’s not looking after his young family.

Maths puzzles are a great way to get additional maths practice, building fluency and problem-solving skills. If you can make it a family activity, this models a good attitude and approach to maths that younger learners will benefit from.

About Komodo - Komodo is a fun and effective way to boost primary maths skills. Designed for 5 to 11 year olds to use in the home, Komodo uses a little and often approach to learning maths (15 minutes, three to five times per week) that fits into the busy routine. Komodo helps users develop fluency and confidence in maths - without keeping them at the screen for long.

* This isn’t exactly what happens in a real-life space launch - the changes in speed depend on many other factors and don’t follow quite such a neat pattern. Just to keep the puzzle simple, let’s pretend the speed really does increase by the same amount each second.